National Leader of the Month for November 2007 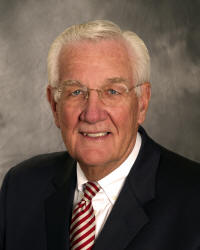 LeaderNetwork.org has provided two mediums for you to experience the leadership insights of National Leader of the Month William Pollard: read them below and listen to excerpts from a conversation on leadership between Brian McCormick and William Pollard. To listen to the podcast, copy and paste the following RSS link into your preferred podcast software: http://www.leadernetwork.org/leadership_podcast.rss. In order to begin playing the audio in a separate window, click here

Bill Pollard is an exceptional leader: during his two stints as CEO of ServiceMaster, a multibillion dollar company, the firm achieved remarkable results; he has led students in the classroom at Wheaton College; he has written two successful books; he has used his influence to aid those in need; he has been happily married for over 48 years; and he has integrated his faith with his work and maintained a standard of integrity as he has sought to be a servant leader. For that leadership, he is the National Leader of the Month for November 2007.

At the beginning of his best-selling book The Soul of the Firm, Bill Pollard poses these two questions: who are you and what do you want? Our answers to those two questions tell us much about ourselves. Driving at Bill Pollard's personal answer to those questions, I asked him to share his story, an anecdote that represents what his leadership is all about. Here is his response.

“It was a lesson of leadership that I learned as I joined ServiceMaster. During my first eight weeks at the Company, I spent my days out doing the work that our service workers did and my evenings doing my job as senior vice president. I learned many lessons as I worked in the field and gained an understanding about the emotions and the needs of the people who did our service work; how the design of a job and the training of a person could be a motivating factor in their development and in their realizing their own dignity and worth as they did their work. I learned how people should be cared for by the firm and treated as the subject of work, not just the object of work. I learned some very practical lessons of servant leadership as I mopped floors and cleaned toilets.”

Chairman Emeritus and former CEO of ServiceMaster and Author

Book you try to read most: the Bible

Current personal passion: I just came back from Africa where I spent three weeks with several of my children and six of my grandchildren working with various projects that our family supports in the areas of micro finance and refugee work. I have a passion and empathy for people who find themselves in circumstances a lot less fortunate than I have had in my life. I have a desire to help and give in both what I have learned about management and leadership and also in financial resources that I can contribute to these needy areas. Do you think enough is being done by those of us living in America to help to address some of the problems in Africa? A lot is being done. In my judgment, more is being done by Americans than any other single group in the world. I believe this is a great tribute to the spirit of America. On the other hand, what is being done is a drop in the bucket as to what needs to be done. What needs to be done must involve the governments of African countries as much as the governments or people outside of Africa. Corruption is rampant in certain parts of Africa and corruption limits what can be done on a macro basis. You cannot do things on a macro basis to solve issues of poverty, healthcare, or infrastructure without an honest governmental structure.

What were some of the significant turning points in your life? My commitment of faith as a young boy; the death of my father when I was 18; my marriage to Judy when we were both 21; a serious illness when I was 33, which resulted in my leaving the practice of law and becoming an administrator and professor at Wheaton College; and then my decision to join ServiceMaster five years later. You bring up your experience working in a college as compared to your experience leading at ServiceMaster. Could you talk a little bit about the difference in terms of your daily experience doing the one versus the other? Are there any distinctions that you can draw between the two…? They were two different environments. Each situation had its own opportunities, challenges, and difficulties. In an academic environment, there is a greater requirement for general consensus before decisions are made. In a business environment, typically decisions are made more efficiently and often more effectively. I enjoyed working in both environments.

What are the places in the world you most like to visit? I have done a lot of international travel. I have enjoyed my experiences in Africa. It is a beautiful continent. I also have enjoyed my many visits to England and Japan.

“If I were to summarize what I have often said about leadership, it would be that the real and lasing measurement of achievement is in the changed lives of the people being led.”

“Information is a source of learning. But unless it is organized, processed, and available to the right people in a format for decision making, it is a burden, not a benefit.”

“If you want people to listen, you have to have a platform to speak from, and that platform is often provided from the achievement of excellence in what you do and developing trust and respect from how you live.”

Most admired leaders (living or deceased): Jesus Christ and Billy Graham; my mentors in life and in work, including Hudson Armerding, Ken Hansen, and Ken Wessner; Peter Drucker was a leader with his advice and his pen; so was C. S. Lewis.

Favorite book on leadership: Max De Pree’s book Leadership Is An Art would be a favorite of mine. Peter Drucker was a personal friend of mine. I have read most of his writings on leadership. I have also tried to learn from the example of the life of Jesus Christ on leadership. [Speaking of Peter Drucker], I have noticed [that you are involved with the Drucker Institute...What sorts of things are you and the institute doing? [The institute is] involved in promoting the ideas and principles of Drucker. This is done through publications, symposiums, and it is also the repository of Peter’s archives.

If you [could] give any advice to aspiring leaders, what would it be? In my advice, I would borrow from Drucker on leadership and remind the aspiring leader that leadership is only a means. "To what end?" is the real question. What Drucker was saying in that statement was that leadership is not just about the leader or the characteristics of the leader, it’s more about the people who follow and the direction they are going. When you look at leadership this way, you focus on the responsibility of the leader to the people being led. Drucker went on to say that a leader has only one choice to make: to lead or mislead. Max De Pree referred to this responsibility of a leader as a posture of indebtedness. If you are not leading people in the right direction, if you are not providing for their growth and development, and if they are not realizing their potential as a result of your leadership, then you are not leading, you are misleading. It was this principle of leadership that Jesus was trying to teach His disciples as He washed their feet. It is not so much about you, My disciples, but the people who will follow you – the people who will become My church. It is important for the leader to know what he or she believes and why they believe it; to know where they are going and why it is important for people to follow. Can you make a comment about how you think we are doing here in America as far as people embracing and understanding that notion of leadership? There is still much to be done for this principle of leadership to be understood and practiced. I am encouraged by what I see to be a growing awareness of what it means to be a servant as one leads and to be responsible for the growth and development of those being led.

For More About Bill Pollard