Leader of the Month for October 2005: 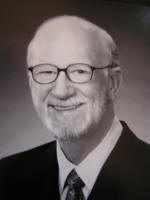 When asked to tell his story, Jack Modesett selflessly credits the people who have impacted him throughout his life. Jack shares, “Most people could write their autobiographies by telling the stories of those who have helped them. I certainly could. Remembering parents and grandparents, friends, teachers and mentors, I realize that every life is a narrative of its intersections with other lives. Recognizing that none of us has anything except that which he has been given by others, we respond with love and gratitude.”

Jack offers the metaphor of the leader as distance runner (rather than simply a sprinter). He expands on that thought by stating, “A leader is one who not only has the vision for what can and must be done, but who has the ability to communicate the vision, inspire the passion, encourage the commitment and drive the process through to completion.” This process of communicating, inciting, nurturing, and following through is what requires the stamina and endurance of the effective leader. It is these qualities that Jack Modesett has embodied (as other high achieving leaders explain). For example, Fred Smith Sr. says of Jack Modesett, “He has realizable vision, strategic skills and a charisma that unites followers. He has character that supports his leadership and dedication to the cause in which he asks others to join him." Harold Myra, CEO of Christianity Today International adds, “Jack Modesett reads widely, thinks deeply, and brings tremendous inspiration to those he leads.”

For attempting the challenging runs, exhibiting endurance, and showing others the way to the finish line, Jack Modesett is the Leader of the Month for October 2005.

Chairman of the Board of Directors at Christianity Today International

Biographical background: I have discovered the secret of a happy marriage: Marry Marcia. I did this almost 44 years ago and, apart from Salvation, it is the best thing that ever happened to me. Three children and nine grandchildren later, I see in these precious lives the living embodiment and expression of the love Marcia and I have for each other. Only God could have orchestrated that!

Place in the world you most like to visit: My own house. I agree with Pascal that all of a man’s troubles come from his inability to sit quietly in his chamber.

Current personal passion: Bible teaching, and, through the teaching, seeing Christians move off the bench and into the game.

Dream: To live long enough to become a burden to my children.

Lifetime leadership highlights: I learned more about leadership in sixteen weeks in Naval Officer’s Candidate School than I have at any other time in my life. The primary lesson was that, in times of great stress, if you focus on the needs of others you will have no time for worrying about yourself.

Harold Myra, CEO of Christianity Today International, says of Jack Modesett, "His commitment and his delightful sense of humor build momentum in any organization he chooses to help. His depth of knowledge about the Bible and his effective communication of its principles bring additional great value to the many contexts in which he leads."

Fred Smith Sr., a mentor to high-achieving leaders, says of Jack Modesett, "In the many years that I have known Jack he has accomplished an impressive history of leadership, both in profit and nonprofit. His natural talents propel him to leadership positions."

Favorite books: Les Miserables. Beautifully written and profoundly moving, it tells the ancient story of redemption through suffering and the healing power of love.

Authors recommended for aspiring leaders: I always suggest anything by Ray Stedman, Oswald Chambers and Fenelon.

Most admired leader: Sam Rayburn of Texas. He was for many years one of the most powerful figures in the country, and he retired a poor man, with his integrity intact.

Traits most important in a leader: God defined it for us when he told Joshua to be strong and very courageous. Strength to persist and courage to prevail are absolutely essential. And God identified the source of true strength and courage: The conviction that God is with us.

Favorite quotations: There are two, both from Napoleon, whom Talleyrand described as “a great, bad man.”

“In affairs of magnitude I have learned that, in the last resort, everything invariably turns upon a trifle.” -Napoleon

“In order to be led, a people must be shown a future. A leader is a dealer in hope.” -Napoleon

Advice for aspiring leaders: Follow Billy Graham’s advice for determining God’s will for your life: Where is the Open Door? What are you passionate about? What are you equipped to do? What do wise elders confirm you in?

What and where are the best training programs for leaders? It is a great pity that military service is no longer obligatory in the United States. Some of our greatest leaders endured it and profited greatly from it.

Where to Go for More About Jack Modesett

Visit the website for the First Presbyterian Church of Houston: http://www.backtothebasics.org. Listen to the lessons that Jack offers.