National Leader of the Month for January/February 2009 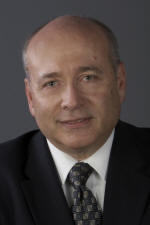 LeaderNetwork.org has provided two mediums for you to explore the insights of National Leader of the Month Ira Chaleff: read them below and listen to excerpts from a conversation on leadership between Brian McCormick and Ira Chaleff. To listen to the podcast, copy and paste the following RSS link into your preferred podcast software:

http://www.leadernetwork.org/leadership_podcast.rss. In order to begin playing the audio in a separate window, click the icon

The National Leader of the Month, Ira Chaleff, sports an impressive resume of impactful experiences. During his career, he has completed meaningful work and spread his wisdom worldwide: to a wide variety of groups in the United States as well as international audiences such as the Senate of Nigeria and Parliament of Sierra Leone.

He demonstrates passion for making a positive difference in the world, and his belief in the goodness and ability in others stems from an upbringing in which he received love and affirmation from his parents and grandparents.

Mr. Chaleff has been consistently willing to take risks when necessary to realize his dreams, and he has been willing to volunteer to achieve his aspirations. He has been at the forefront of a movement on followership, and his focus on leaders and followers has been apparent in his work and in the influential books he has authored. For his leadership--and the leaders he has influenced--Ira Chaleff is the National Leader of the Month for January/February 2009.

Ira offers this story in his own words:

My mission has always been about how to reduce the unnecessary suffering in the world caused by the abuse of power. When I saw the undeveloped niche of exploring how followers can help leaders minimize the tendency of power to corrupt, I entered it despite the lack of any formal credentials for doing so. I read what I could find and thought deeply about what I had seen in life about this and began putting ideas together and sending them into the world for feedback and enhancement. The result has been a fifteen-year journey of helping create the emerging field of followership studies.

When I was appalled by the brutality of the civil war in Sierra Leone in which rebels amputated the hands and arms of hundreds of children to spread terror, I wrote a book to revolutionaries asking “How will you be sure in your efforts to overthrow oppression that you will not become the next oppressor?”

While living in the real world, and advising very real political and business leaders, I have not abandoned my idealism: my belief that we can make a difference in the world. I am aware that my efforts have a limited capacity to affect the world at large, but I do not let that be an excuse for inaction. I make the very best contribution of which I am capable in order to make a difference. When I die I will die with a sense of failure to make a sufficient difference in the world--as do most humans--but also with a sense of integrity at having made my contribution.

Favorite quotation: “The meaning of life is not a fact to be discovered, but a choice that you make about the way you live.” -Hilda Bernstein, South African Activist

Favorite book: Orbiting the Giant Hairball: A Corporate Fool’s Guide to Surviving with Grace by Gordon MacKenzie. Besides being one of the most artful and creative books imaginable, MacKenzie unlocks one of the secrets of being a successful change agent in large organizations.

Books recommended for aspiring leaders: I tailor this to the individual I am coaching. Some need to be more caring (more human). I might recommend Small Decencies: Reflections and Meditations on Being Human at Work by John Cowan. Some need to learn to work with powerful leaders and earn their respect. I might recommend Lion Taming by Steve Katz. Some need to learn basic management styles before they can aspire to an actual leadership role: I might recommend a basic book like Leadership and the One Minute Manager by Ken Blanchard and Patricia Zigarmi, which is a concise explanation of Situational Leadership Styles. For all I recommend reading biographies of significant leaders to learn how they were tested and how they met those tests.

Personal Passion/Dream: I want to use the rest of my life to inject the meme of courageous followership--or followership of conscience--into as many cultures as I can.

Places in the world that you most like to visit: I like to go to Spanish-speaking countries where I can continue to develop my competence in another language.

Describe one of the turning points in your life: When I conceived the idea of a book on followership. I read about the My Lai massacre in M. Scott Peck’s book People of the Lie: The Hope for Healing Human Evil. He observed that decent people seemed to abrogate their moral responsibility when in the role of follower. I immediately saw the need for a serious book on followership. After a year or two of keeping my antennae out for writing that shed light on this--and finding little--I sat down to begin writing what I already knew about this subject from the experiences of my life. When I had developed my ideas sufficiently I sent the manuscript for what became The Courageous Follower to my publisher of choice, Berrett-Koehler. Then, I was blessed with a publisher, Steven Piersanti, who deeply resonated with the themes in the book.

Beverly Bell is Executive Director of the Congressional Management Foundation. She offers the following high praises of Ira Chaleff: “Ira has conducted several leadership training classes on behalf of my nonprofit which provides management services to the offices and staffs of the U.S. House of Representatives and U.S. Senate. His class consistently ranks among the favorites for the Chiefs of Staff who have the difficult task of being effective leaders to both ambitious staffers and powerful Members of Congress. His insights and delivery make him a valuable teacher and leader in his own right.”

Advice for aspiring leaders: Be committed to your organization’s mission and whatever part of that mission you are currently responsible for. Do that job as if it is crucial to the success of the mission. Observe good leaders. Pay attention to what they do, what they say, how they say it, when they say it, the tone of their communication, their body language, how they praise, how they correct, and how they think about systems. Observe poor leaders. Pay attention to what they do that is self defeating, demoralizes others, or is of questionable integrity. Be very alert to not mimic these characteristics when you are in a leadership role. Be alert that good leadership characteristics and poor leadership characteristics can and often do exist in the same individual. Don’t confuse which create the success that the leader enjoys. Do your core job very well and look for opportunities to take additional initiatives that will stretch you and demonstrate what you can do.

Most admired leaders: My favorite historic leader is King Alfred, the first king of England deep in the Middle Ages. Against overwhelming odds he defended his country from invaders. Then he used the peace (that his resistance bought for his country) to introduce education to the people through his own example and through his official acts. He learned to read and write, required that those around him do the same, personally translated historic and spiritual texts into the language of his people, then set up schools for those of high and low birth to promulgate learning. While doing this he had to repeatedly defend his country militarily, but military victory was never an end in itself. It bought the freedom to develop civilization.

My favorite leader of this century is Nelson Mandela. After exhausting all non-violent means he made the terrible choice to overthrow oppression through armed struggle. But he did not use terrorism against civilians; he did not become a violent person, and, when victorious, he did not establish a violent regime. He actively embraced his opponents, healed terrible wounds and united his country.

My current favorite leader is Barack Obama. Watch his body language and facial expressions. He rarely smiles when he talks, yet he exudes positive confidence. Many politicians overuse smiling to project a confidence or warmth or positiveness that they don’t actually feel. They are using this manipulatively to win our favor. Obama is speaking from a deeper place that doesn’t need cosmetics. That authenticity is what people are responding to.

What is your metaphor, story, or analogy for leadership? I like Robert Greenleaf’s concept of the Servant Leader. The more we remember that we are in service to others the better we will be able to counteract the ego inflation that all too often accompanies leadership.

What are the traits that are most important in a leader? I believe that commitment, integrity and communication are the core qualities. The ability to see patterns and imagine the potentials that exist within those patterns provide the vision that leadership needs. The capacity to appreciate others and help them develop and deploy their talents in service of the mission is key to moving beyond the need for the leader as hero. But no leader brings all of the traits a leader would ideally have, so being open to correction or compensation from other team members allows the best of the leader’s traits to be ascendant while the impact of less desirable traits is minimized.

Describe an important piece of advice you have been given. You can’t just reorganize yourself out of a financial crisis. You have got to emphasize the right products for the right customers and promote your capacity to deliver these. That buys you the time to reorganize things.

What can organizations do to encourage or stifle leaders?