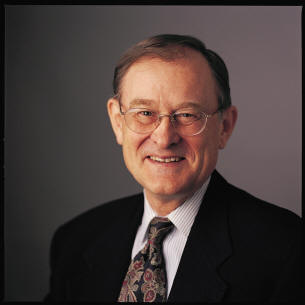 As a college student, I was greatly challenged by this call to prayer from the Bible: “Call unto me and I will answer thee and show thee great and mighty things which thou knoweth not.” In the quiet hills of Pennsylvania, I had no idea what God might have in mind, but attempted to take up the challenges.

Helmut Thielicke, who as a young Lutheran pastor resisted the Nazis, said that “We live by God’s surprises.” Oswald Chambers said much the same thing.

Some years ago I wrote an autobiographical book titled Living by God’s Surprises, which indicates how I saw that theme fleshed out in my life at that time. More recently I wrote Surprised by Children, which touches on my early years and career, and then our adoption of three African American children.

Most recently, as I have considered retirement, this theme of living by God's surprises has again become dominant. I am convinced that when we call on God, he does bring about remarkable surprises.

Executive Chairman and CEO of Christianity Today International and Author

As a leader of Christianity Today International, Harold has been instrumental in creating an extremely successful nonprofit organization. Behind his leadership CTI has vastly expanded the number of magazines it publishes and the audience it reaches. The CTI website explains that more than 2.5 million readers currently receive the organization's 11 publications that include Christianity Today, Leadership Journal, Campus Life, Today's Christian Woman, Marriage Partnership, Christian History & Biography, Your Church, Today's Christian, Books & Culture, Christian Parenting Today, and Men of Integrity. In addition, CTI reaches additional people with these online offerings: PreachingToday.com, BuildingChurchLeaders.com, and the Christianity Today online magazine.

Jack Modesett, Jr., chairman of Christianity Today International, shares the following insights about Harold Myra: "Harold Myra sets the tone at CTI by leading from in front with integrity and from within by example.  His integrity is a reflection of his character. He is genuinely pleased when others succeed, and his ego does not demand that he get the credit for the work of others. One of his joys is providing opportunity for talented people to grow, and, if necessary, even to grow into larger responsibilities with another organization. One of the reasons the employees of CTI are so diligent is that they do not want to disappoint Harold. His example of hard work and dedication to excellence causes those around him to hold themselves to the high standards that would be considered exceptional at another organization but are the norm at Christianity Today."

Favorite books:  The Seeking Heart by Francois Fenelon and Stress for Success by James E. Loehr

Harold identifies the following quotation as a favorite from The Seeking Heart: "Each day there is just enough that God gives you to take care of—nothing more or less is expected of you…. When tomorrow comes it will probably be different from what you had imagined…simply let God’s will unfold around you."

From Stress for Success, Harold draws attention to this quotation: "Getting control of our personal chemistry, getting control of emotion, and getting control of stress are all one and the same. The hand that's dealt to you daily at the office, and the number and kind of stressors that flow in and out of your corporate life are not the determinants of your stress level. Your body's internal response dictates everything. Change perception, and the chemistry changes."

Books recommended for aspiring leaders: Good to Great, by Jim Collins, and biographies of all sorts, such as ones by David McCullough on Truman and Theodore Roosevelt

Most admired leader: Billy Graham. Marshall Shelley and I recently researched and wrote a book called The Leadership Secrets of Billy Graham, published by Zondervan. It’s to be released in July 2005. We interviewed many of his closest associates and top leaders. We were strongly impressed by Billy’s remarkable leadership capacities, and try to communicate this effectively through the 21 principles that he made the core of his life.

Traits most important in a leader: My bookshelves are full of wonderful books on leadership, starting with those of Peter Drucker and Fred Smith, as well as spiritual classics that demonstrate the power of spiritual leadership. In working on the Billy Graham book, I tried to draw from all these sources, not only seeing how they were embodied in the leadership of Billy Graham, but also how we might appropriate them ourselves.

What are the leadership highlights of your life? For me, the opportunity to work with creative, high-capacity people has been a wonderful privilege. Having a part in their growth and development looms as the largest satisfaction. People like Philip Yancey, Tim Stafford, Dean Merrill, David Neff, Harold Smith—the list goes on and on—have energized and enriched my life even as I have contributed to theirs.

Favorite quotation: "Embrace the difficult circumstances you find yourself in--even when you feel they will overwhelm you. Allow God to mold you through the events he allows to enter your life. This will make you flexible toward the will of God. The events of life are like a furnace with a heart. All your impurities are melted . . ." -Fenelon

Where to Go for More About Harold Myra

Read his books: Harold has written numerous books including The Leadership Secrets of Billy Graham (co-authored by Marshall Shelley). The book, published by Zondervan, is about to be released as of this writing. (Click here to go directly to the book in a new window.) 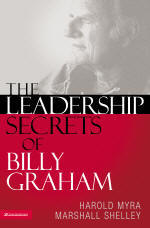 To see some of the other books Harold has written, click here.